The tween years, this weird little period in your kids lives where they are halfway between being a kid and a teenager. It’s kind of a fun time, kind of frustrating, where you learn to relate to your child more as a teenager and less as a child.

Now, there has been a lot written about tween girls, and believe me I thank my lucky stars that I have sons because I can barely deal with my own PMS let alone dealing with my daughters too! With boys, you don’t have to deal with periods, bras… all that happy shit. But as I’m entering into these years with my third son I’m reminded that raising tween boys has its own set of ups and downs and weirdness. So I thought I’d lend some advice to other moms raising tween boys!

Because let’s face it, boys are already weird, and entering into the tween years doesn’t change that! 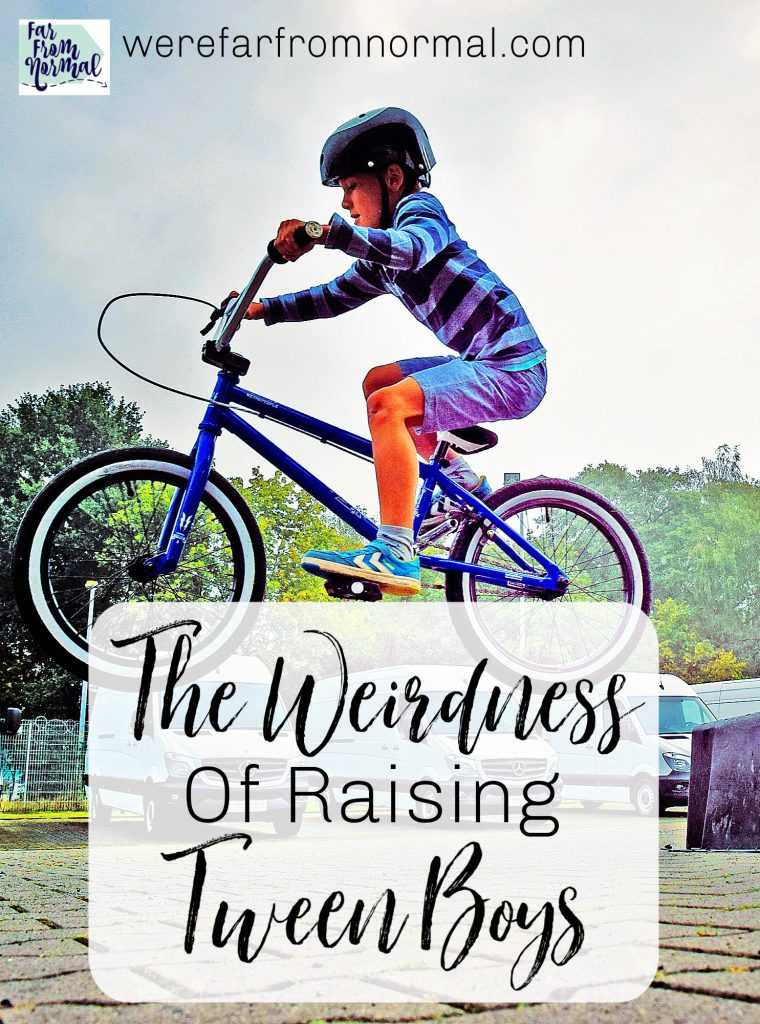 They’re emotional-  Oh my, these years come with some heightened emotion. Sometimes it comes out as manly testosterone frustration that wants to punch things and other times it comes out as weeping like a pregnant lady during a Kleenex commercial.  There have seriously been days where if my boys were girls I would be praying for their period to start! It’s important to remember that they are feeling as mixed up as their emotions. Tween boys are still very much little kids but also feeling bigger and more mature. Their hormones are starting to kick into high gear and they’re feeling out of sorts. Give them some extra hugs, give them time to themselves if they need to cool down, keep them active ( martial arts is a great outlet) and be there to talk if they need you!

Their friends start being more important – You’ll start to notice a shift where they want to talk to their friends more, face time with them, and hang out. They want to relate to their peers more with video games, tv shows and other interests. They’ll start referencing what their friend said or did, and they may even have an argument or two. (I’ve been assured by girl moms that the boy arguments are nowhere near the girl drama) Help them make time to hang with their buds and chat with them! 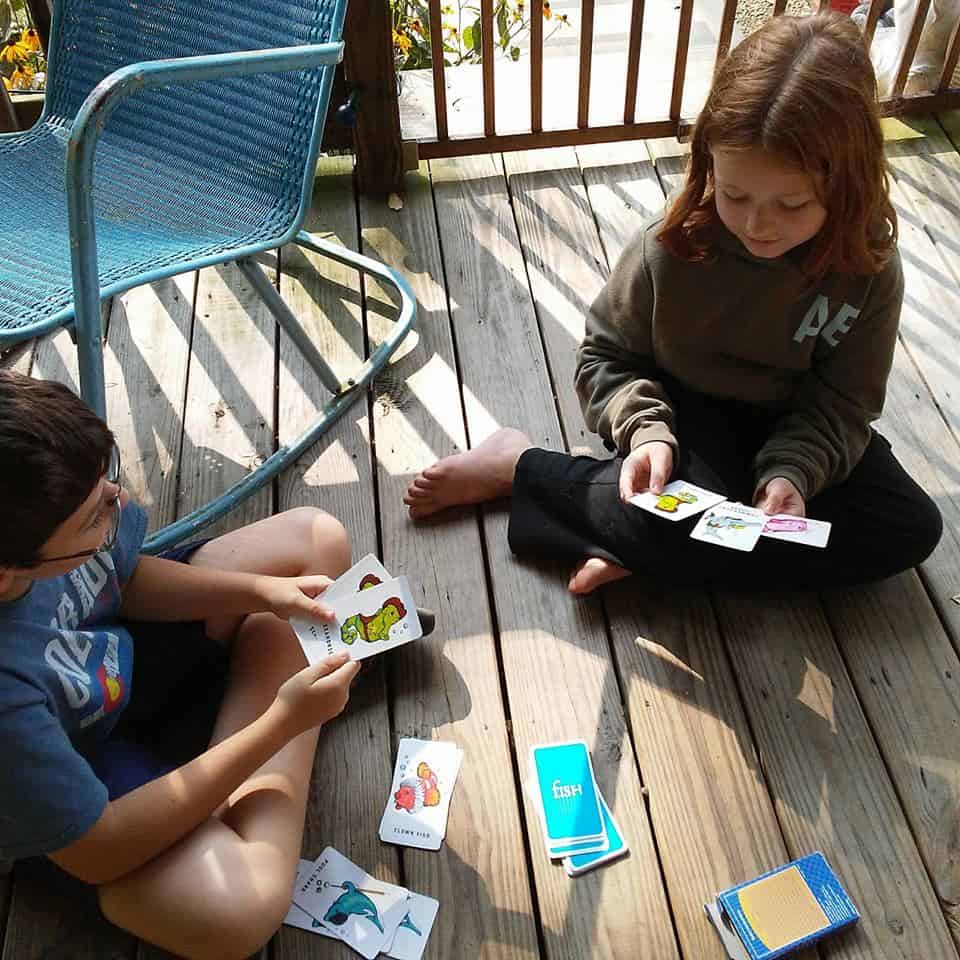 Personal hygiene gets weird – So if all boys are like my boys personal hygiene goes one of two ways, either they become a little crazy about it, showering like 7 ½ hours and combing their hair constantly, or they decide that there really isn’t much reason to shower or change their clothes more than once a week. They also get way more private, they want privacy when they change their clothes, shower etc.  If you’ve got a marathon showerer talk to them about it and set a timer, if you’ve got a shower averse kiddo it’s time to talk to them about stinky armpits and the importance of keeping clean!

Style becomes more important – All of a sudden that kid that was happy with a buzz and a pair of crocks wants to shop at the mall or get a certain haircut. Don’t be too concerned about the wacky styles they’ll come up with, funky hats, original sock and sandal combinations, strange mixes of clothing… they move on to something else pretty quickly.  My ten-year-old is currently rocking a fedora and a gold bracelet whenever we go out, likely it won’t last too long! Let them do their thing, and find their own sense of style, let them have fun as they discover it! 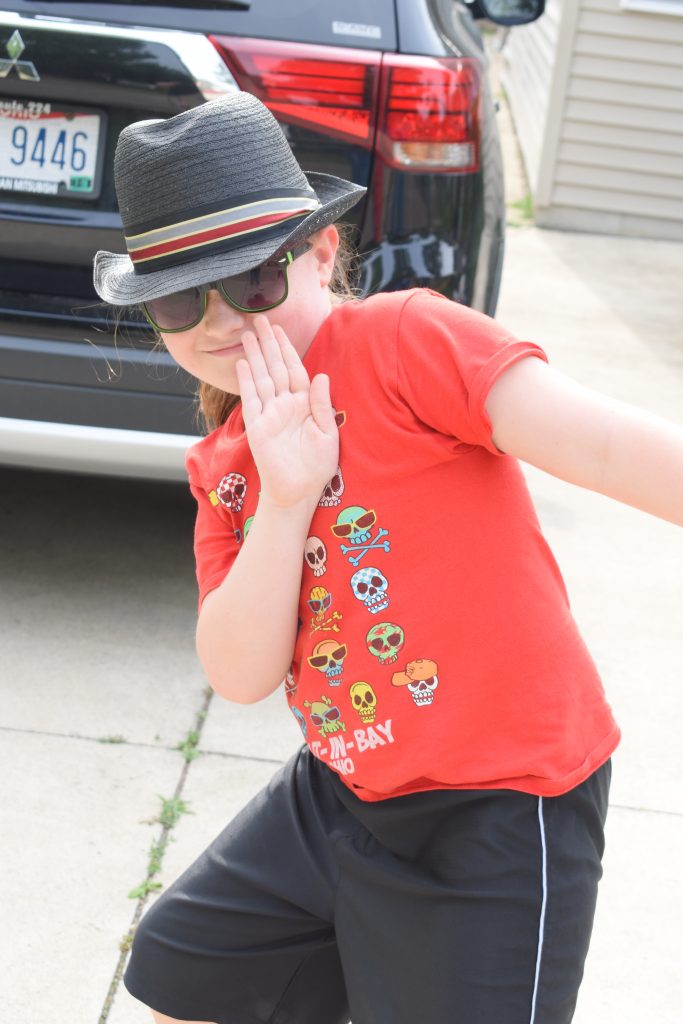 They’ll start to notice girls (a little) – So it begins. The wonderful world of noticing girls. It’s not obvious at first, but you’ll notice that there are certain girls they talk about a little more than others. They may try really hard to get their big brother’s girlfriend to giggle, or go into show-off mode when girls are around. It’s so strange, and so foreign, don’t worry you get to be the #1 girl in their lives for a little while longer (and you might still even get snuggles on the couch!)

These years are the ones where you want to think about the relationship you want with your son as he enters his teen years. They are the years where you want to connect, choose your battles carefully, keep the lines of communication open. You want to talk to him openly about his changing body and all the feelings and experiences that come with becoming a teenager. It doesn’t have to be a time of turmoil if you remember to just chill out, try and understand the changes he’s going through, and keep leading with love!