Home » Are You Parenting Your Kids or Bullying Them?

Being a parent is tough. Raising kids to be respectful and kind starts with how we treat them and sometimes we need to step back and check our approach. In this world where bullying is an epidemic, and kids are learning more and more how to be mean and hurtful it’s time we take a good look at what we are teaching them at home. Are the approaches we’re using really parenting or are they bullying? 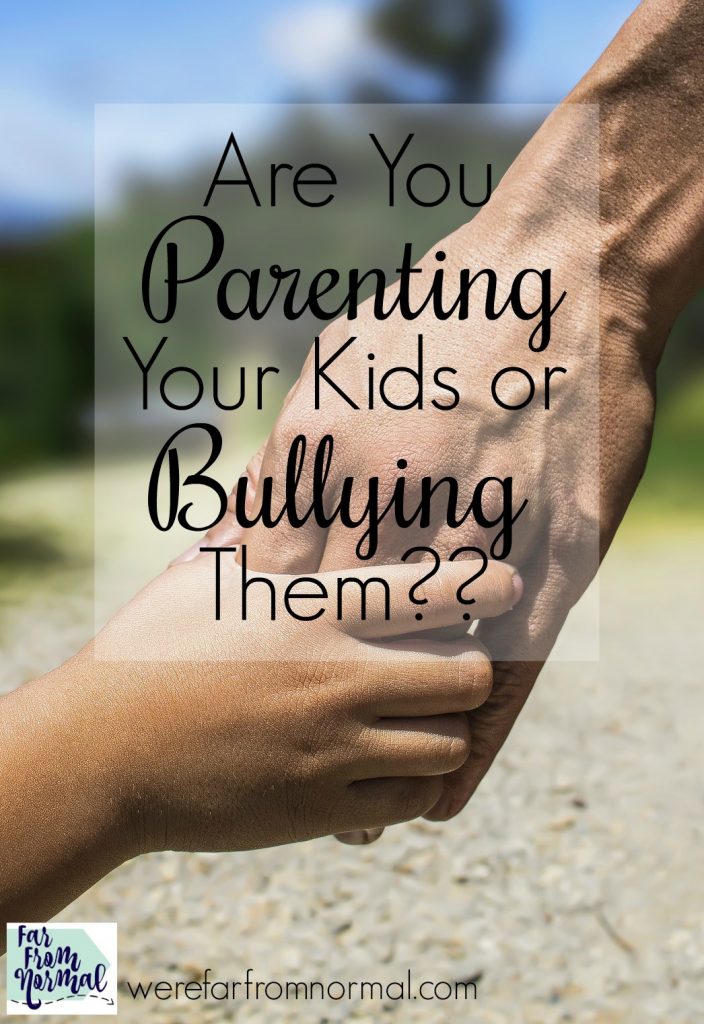 I’m also a big believer in not judging other parents, I know that each of us is doing our best and working with the skill set we have. However, there is a distinct possibility that there isn’t anyone in your life who is going to point out you might be being a little too harsh. You might not see the habits you learned from your parents or society as detrimental. You might even think that because the approach gets the results you’re looking for that it is a good one…. But is it?

I think a good barometer for if how you’re approaching your kids is acceptable is to ask the question to yourself “Would I treat an adult this way?” or ask yourself, “What if someone else treated my child this way?”

If you wouldn’t say what you are saying to your child to another adult chances are that it isn’t a respectful, positive way to speak to them. If someone else treated your child in the way you are and it would upset you then obviously it isn’t the best approach.

It’s hard to change parenting habits, it’s hard to change our thinking and our actions but identifying harmful behaviors is the first step. The fact is, that most parents are doing their best, want to raise happy healthy children, and are motivated by their love of their kids.

But we must start realizing that kids are people. They don’t deserve to be treated like they are stupid, or can’t make decisions, we can’t minimize their opinions or not care what they have to say. We need to treat them like the important people that they are, raise them in a positive way that makes them feel good about themselves, because that inner confidence and self-love translates into the way they look at the world around them, and ultimately how they treat other people.

So, let’s check ourselves, shall we? Let’s ask the question about some common parenting behaviors… is this really parenting, or is it bullying? 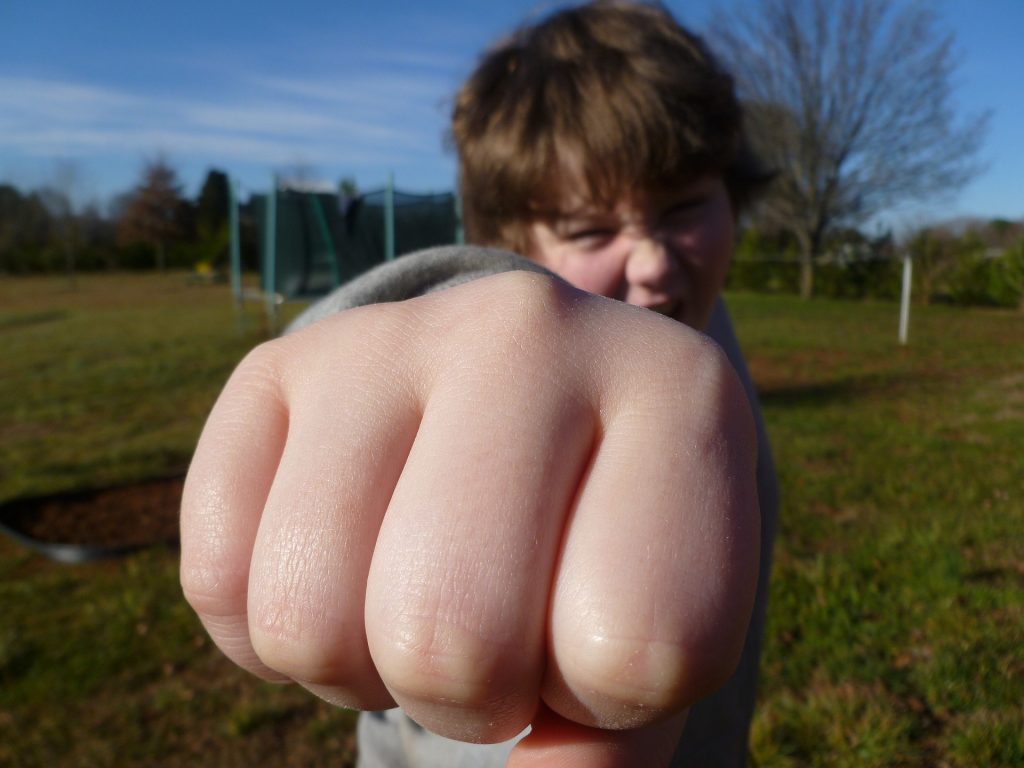 Yelling-  Yep, we’ve all done it. You just cleaned the kitchen and your child comes walking through covered in mud. You have told them 150 gazillion times to put their shoes on it’s time to go… It is par for the course of parenting. However, those times when you lose it should be few and far between. They should be super rare occasions where the fact that you are only human comes out for a minute; you regain your composure and then apologize and speak to your child with kindness. If you are constantly yelling at your child there is one huge fact you are relaying to them…. You are out of control.

The moment your voice starts to raise, that you can’t control your own vocal chords, you are showing your kid that when you are angry, frustrated, or upset that the thing to do is lose your shit. When we show kids this on a regular basis guess what they’re going to do?

Mirror, it right back at us.

It will rear its ugly head in the form of tantrums, talking back, hitting or yelling at their sibling. The unfortunate part is that those behaviors will probably get them yelled at. Yelling can be a hard habit to break. But would you yell at your boss or coworker? Would you yell at a friend who upset you? Start by telling yourself that it is unacceptable and you want to change your approach. Then start pausing before you react, take a deep breath, control your reaction. You’ll be surprised how your reaction can diffuse an unpleasant situation quickly and easily if you don’t yell and contribute to the drama.

Saying,“You’re going to make me mad” –…. Really?? There’s a pretty famous guy that says something similar, “You won’t like me when I’m angry,” then he turns really big and green and wreaks havoc on the world around him. When you think about it looking at your child and threatening them with your anger is pretty much hulking out on them. What does that mean, “you’re going to make me mad?” You are basically implying that your anger is something to be feared and that is why your child should behave.  Is that really your goal? Do you want your kid to be afraid of you and fear your anger? Is that something you’re proud of?

Like yelling you are simply saying to your child “I’m about to lose control of my emotions and direct that at you.”  That isn’t a healthy way to deal with frustration with anyone let alone your child.  Check your emotions, calm yourself, and correct your child’s behavior out of love and self-control instead of anger. When you start to curb your anger in favor of a more positive and loving approach your child will want to behave, they won’t try your patience because it no longer gets a reaction.  Don’t let the Hulk even peek his head out! 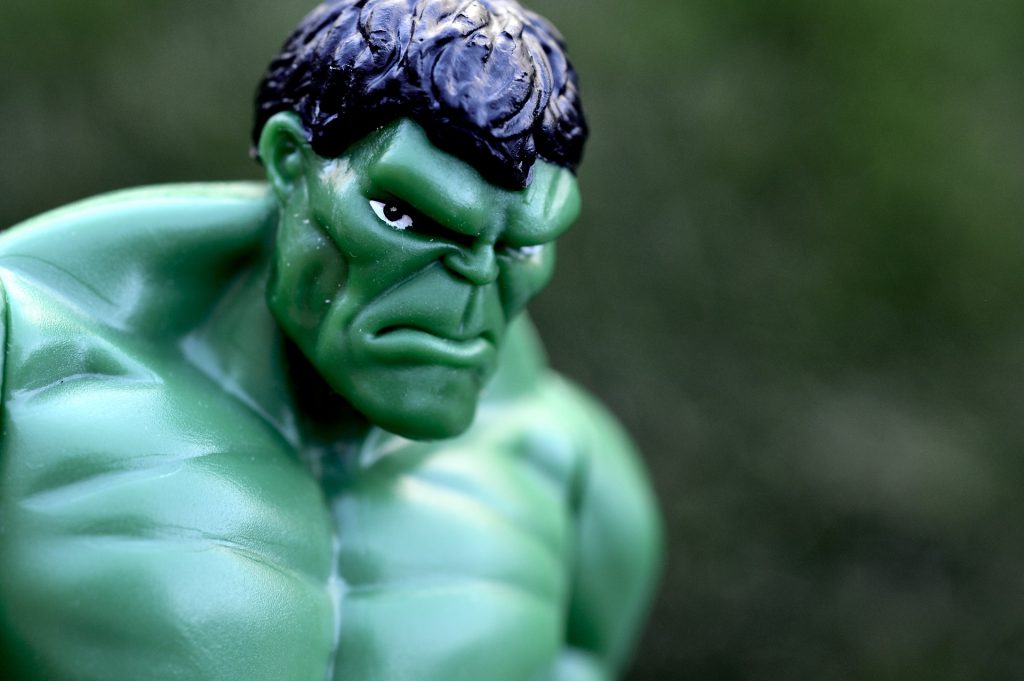 Setting them up for failure-  There is a certain mom I know who gives her children massive amounts of chores. She’ll have them scheduled for multiple activities during the day and only leave them a little bit of time in the evening to get those chores done. Then if they don’t? They’re punished.  I have seen other parents yell or punish their kids for doing something when the child clearly had no idea that they shouldn’t be doing it.  Any time we set up scenarios where our kids are bound to fail whether it is time, their capability, or their lack of knowledge and we punish them for it that is nothing but a show of power. We are saying to the child, “I don’t care what the circumstances are even if I set them up against you, I have the power here.”

Think about it as an adult, if you were pulled over for speeding and there were now speed limit signs posted you would present your case in court. If your boss piled your desk with 5 hours’ worth of work ½ an hour before quitting time you would know there was no way you could get it all done. Punishing our kids for being in a situation that sets them up for failure, and knowing that we are the ones that put them there shows them that our priority is the ability to punish.

Not accepting them for who they are-  Kids are unique human beings. They have minds, spirits, and personalities that are uniquely theirs. So often parents don’t allow their children to express their individuality for fear of what society will think or because of their own set of rules or standards. If you have a son who wants to take a dance class and you tell them that isn’t “manly” you aren’t letting them be themselves. If your family has religious beliefs and your child questions them only to be told they are wrong, you are not letting them discover their own spiritual path. If your child wants to express their creativity through their dress, their hair color, or the way they decorate their room why not let them? Why not let them know that you are accepting of them, who they are, and the path they take in life. There are ways of guiding your kids, of helping them become their best self and still giving them their freedom to be their own person! 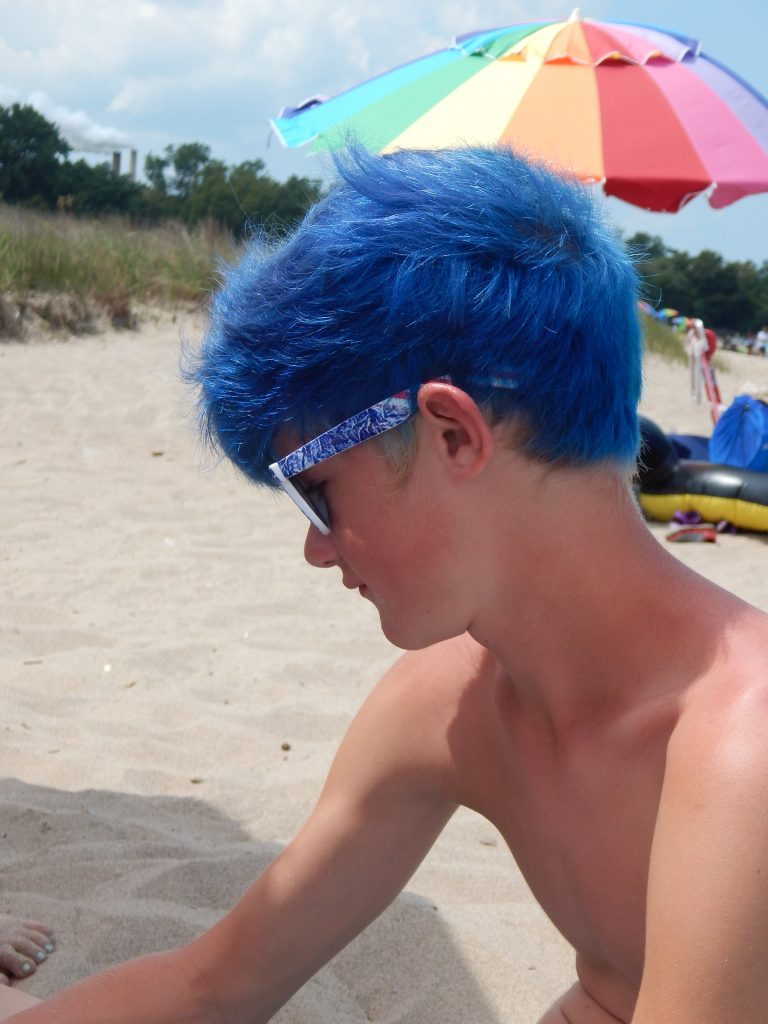 Telling them “What they are”-

“You are so difficult!”

“What is the matter with you?”

Stop and think about those statements… really think about them. Our children hear what we say to them, they take it to heart. Our words become their inner voice. What is a child who is told they are difficult or bad going to grow up thinking about themselves? What about the child who questions things, and wants to know why and they are told “because I said so” or to be quiet. Are you killing their curiosity, are you diminishing their independent thinking? Are you saying things that are going to build them up or tear them down? A child who is told they are difficult enough is going to believe it and behave that way. A child who thinks something is the matter with them isn’t going to strive to their full potential. Watch your words, watch what you are putting into your child’s mind and if you can’t say something nice don’t say anything! 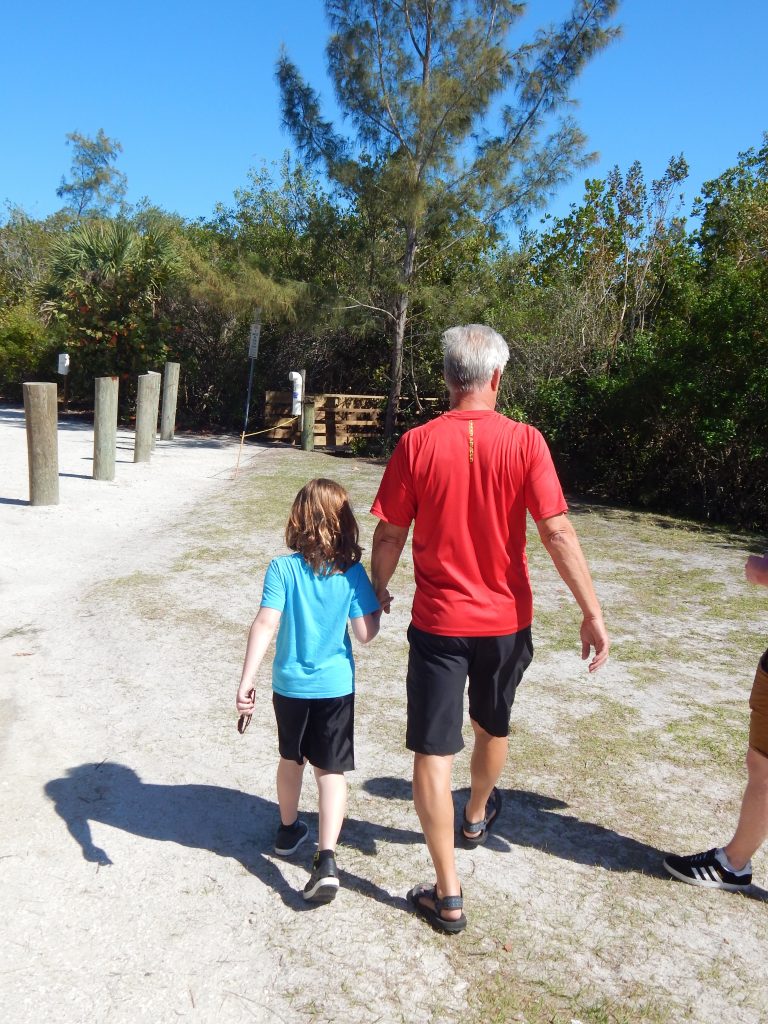 Shifting your approach as a parent can change your relationship with your child. You have the power to let them find their voice, feel good about themselves, and know that no matter what they are loved.

In this world of bullies stand up for kindness, and raise kids that do the same!

Raising Kids to be Teens Who Talk to You 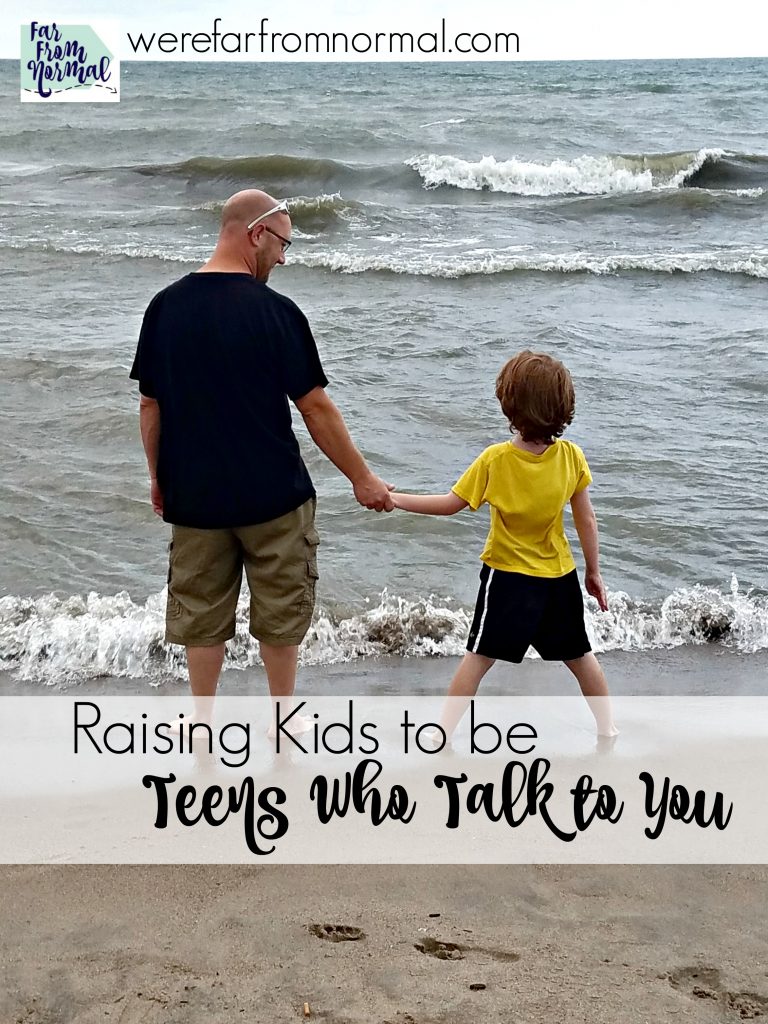 Yes, You Can (and Should) be Friends With Your Kids 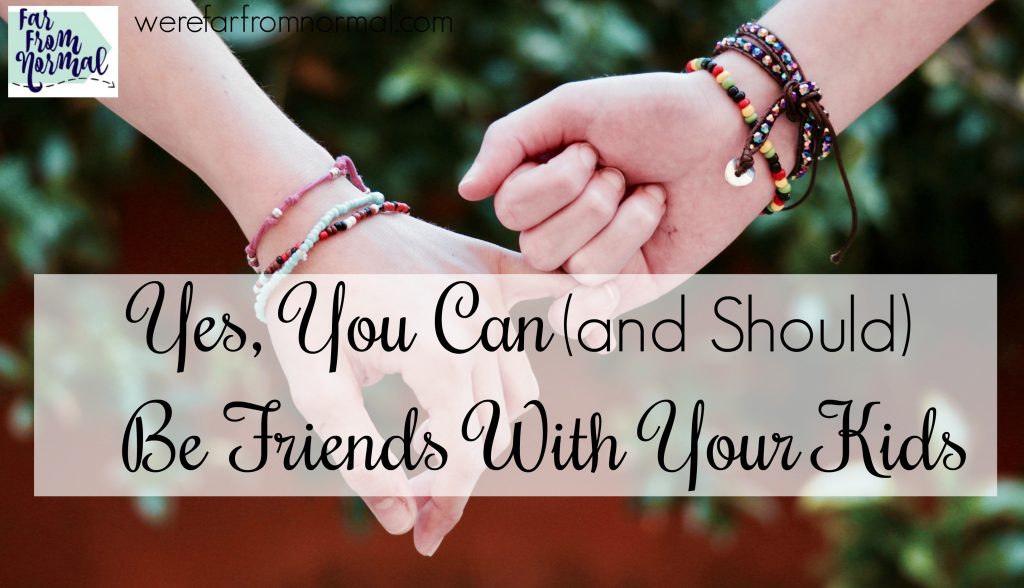 Why Moms Need Self Care 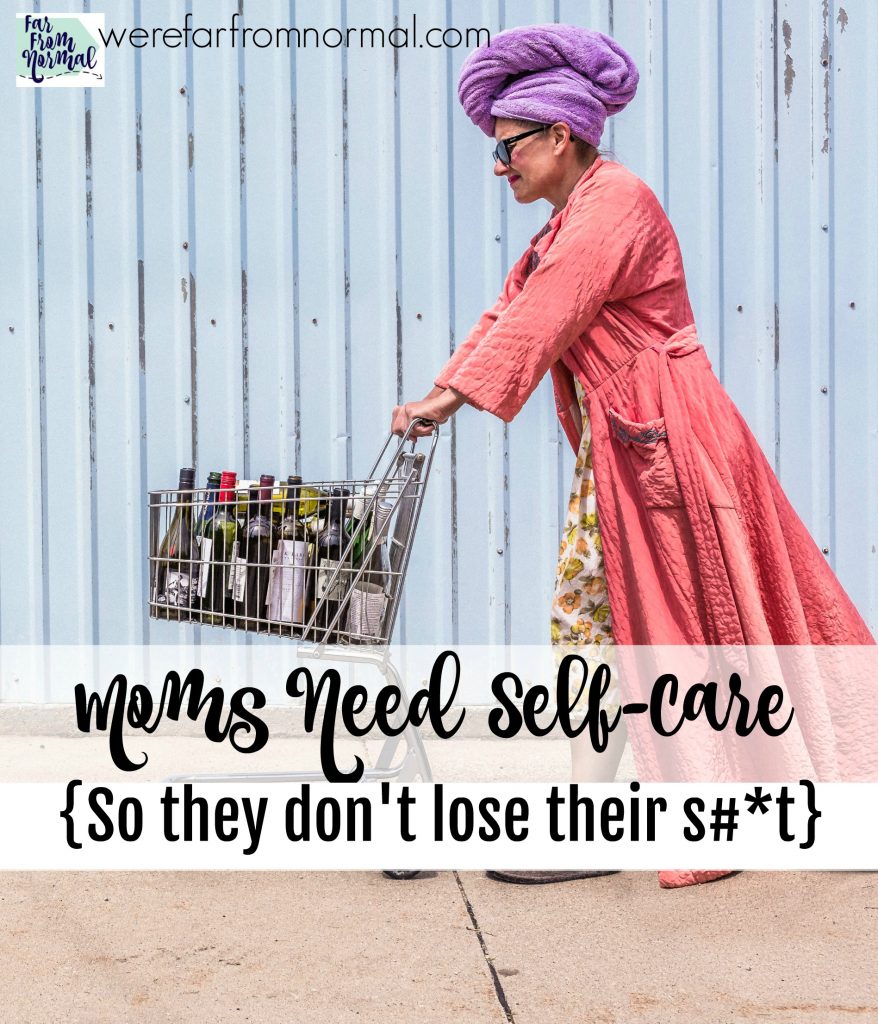