**I received a Tap My Trees kit for free in exchange for my honest opinion, I have been compensated for my time. All opinions are 100% honest and my own!

Did  you know that it takes, on average, 5 gallons of maple sap to make 1 pint of syrup?? Crazy right?

I learned that interesting tidbit of information several years ago when I was investigating how to make maple syrup at home. At the time I found it overwhelming and decided that I was destined to purchase syrup instead of making  my own.

A couple of months ago I was introduced to Tap My Trees. A company that has fantastic kits for maple sugaring at home complete with everything you’d ever need to make your own syrup. (you can read my first post about the kits here)   I thought it was a sure sign from the universe that I was meant to make my own syrup… even if 5+ gallons of sap seemed overwhelming. 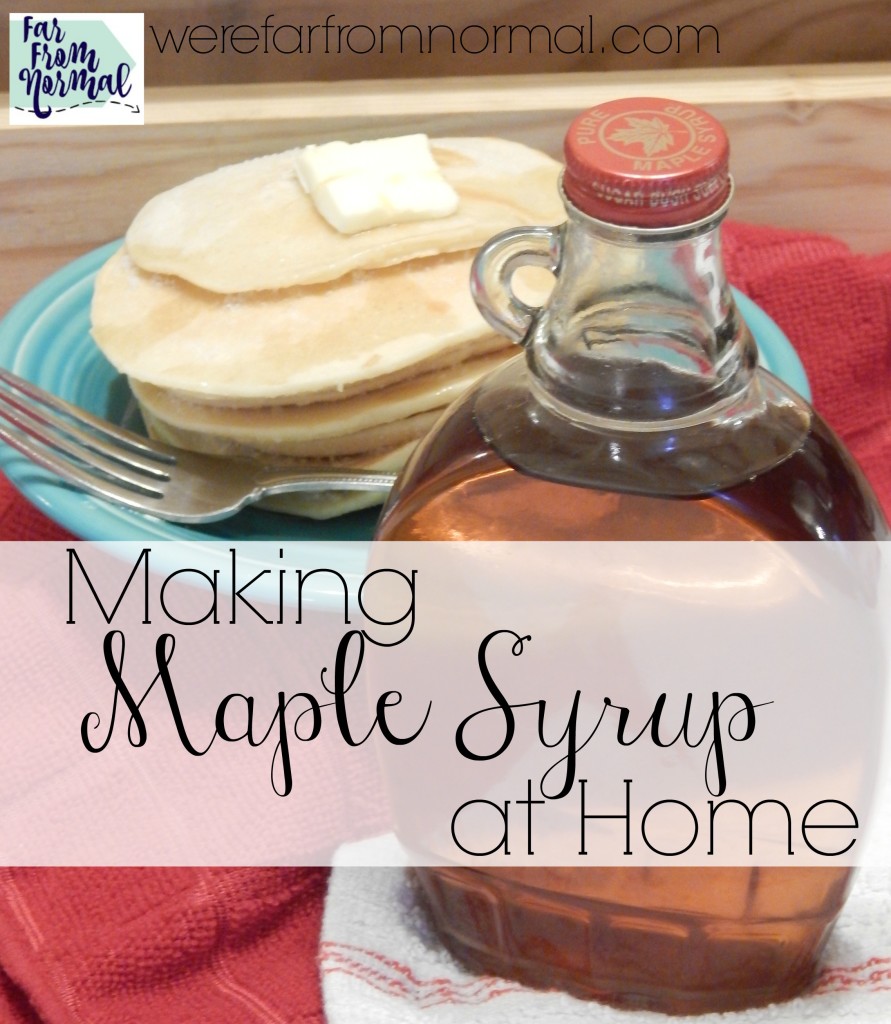 I am such a geek for things like this. The Tap My Trees kit came with a great little instruction book that held all the info we needed to get started. It said that once the days started warming up in January or February that was the time to tap. The ideal conditions are over freezing during the day and below freezing at night.

I honestly didn’t know what to expect. We have one maple tree and I wondered if it would actually yield enough sap to make any amount of syrup.

But out we headed with our spile, bucket, and drill see what we would get. 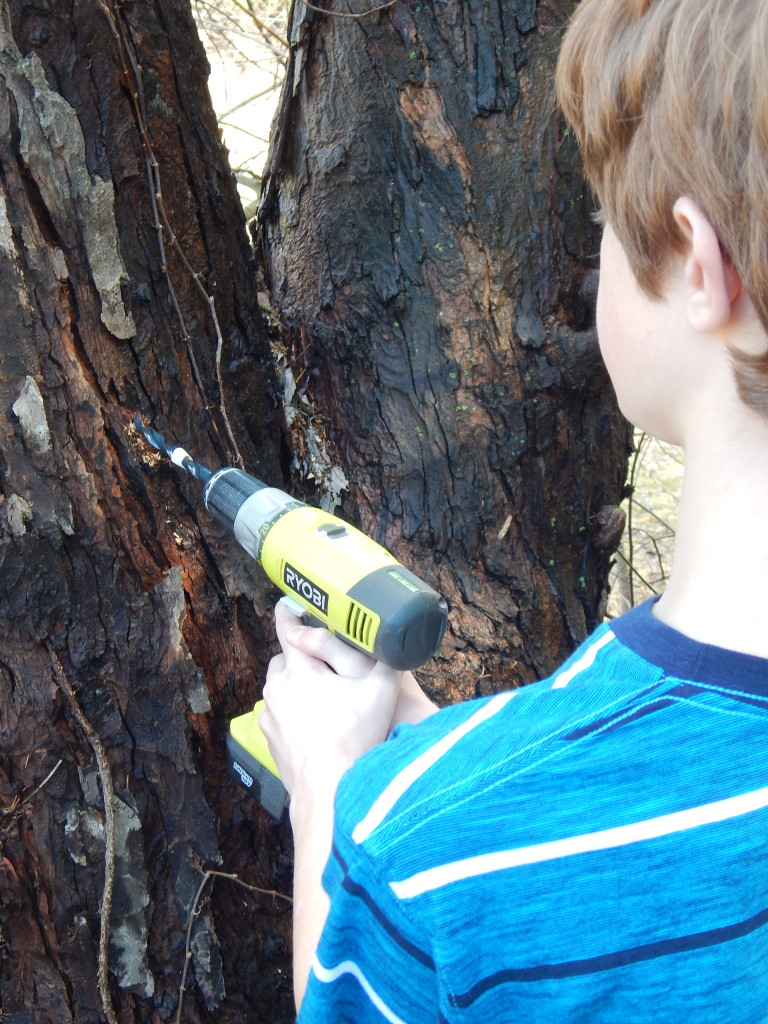 After drilling into the tree ( The drill bit was included in the kit, we marked it with tape to know how deep to go) the sap immediately started flowing!! We hammered the spile into place and it was amazing how the sap just started pouring out! 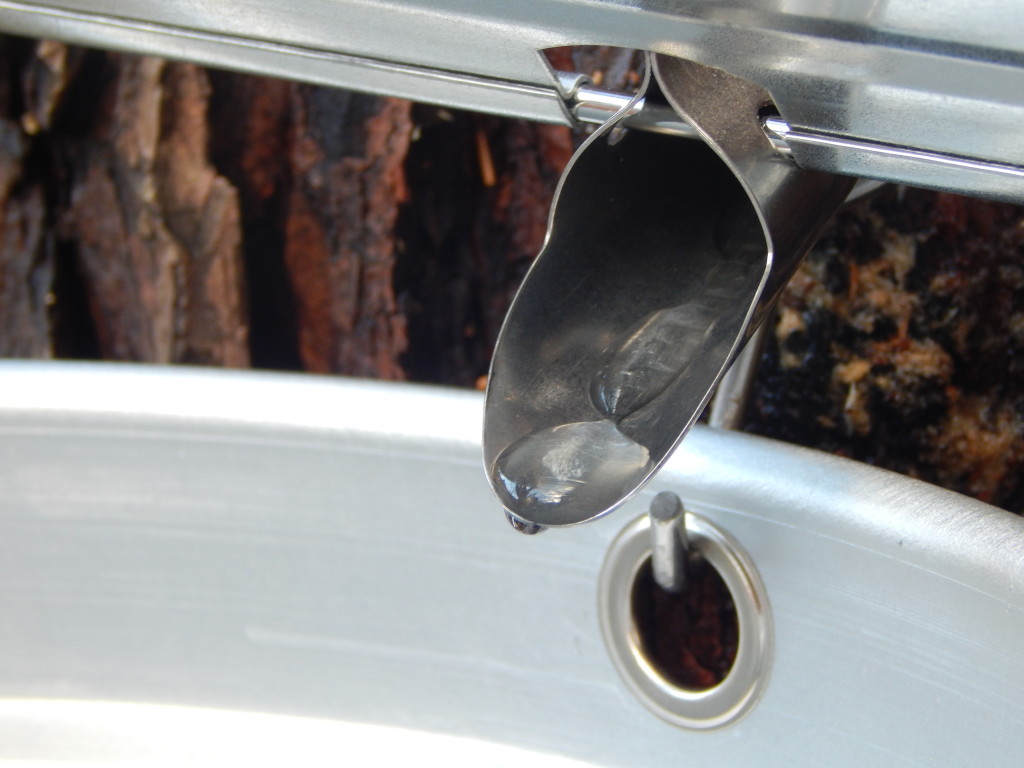 Within just a couple of hours our bucket was almost half way full!

We waited until the next morning and were so excited to have our first full bucket!! 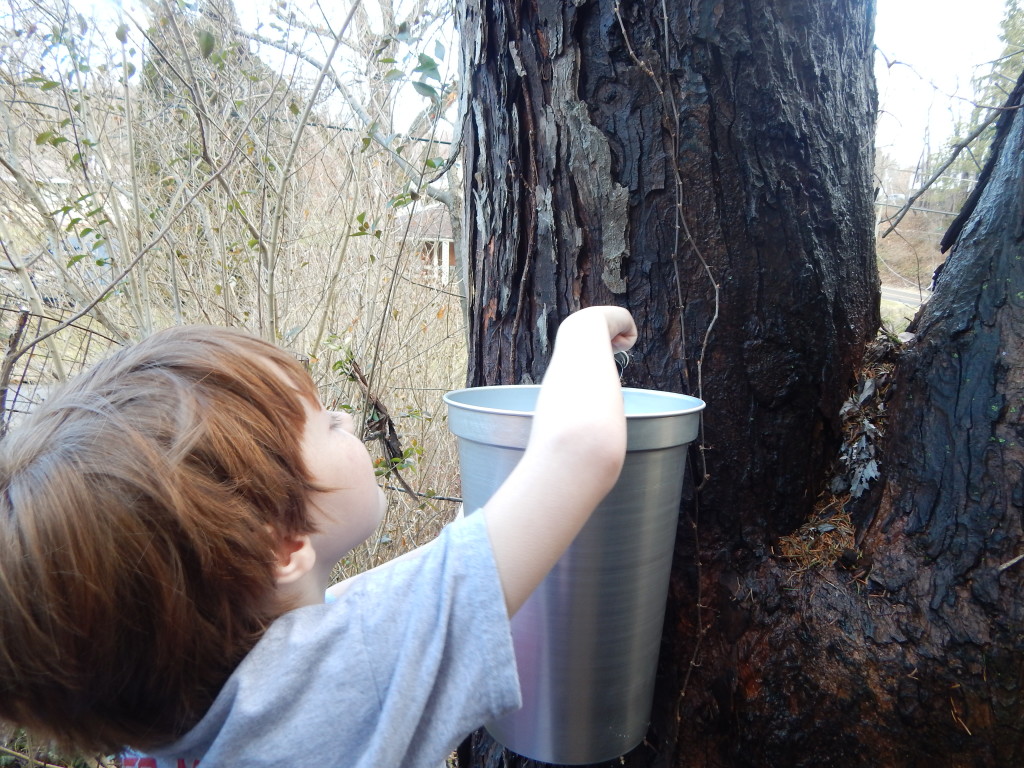 Before starting this project I made sure to keep a few gallon jugs to store our sap.   I highly recommend if you have a spare fridge to store your sap in it, or make sure your main fridge is good and cleaned out before starting!

After collecting the sap we strained it through cheesecloth (provided in the kit) to take out any dirt or debris. There wasn’t much, but a few crumbs in each bucket of sap. 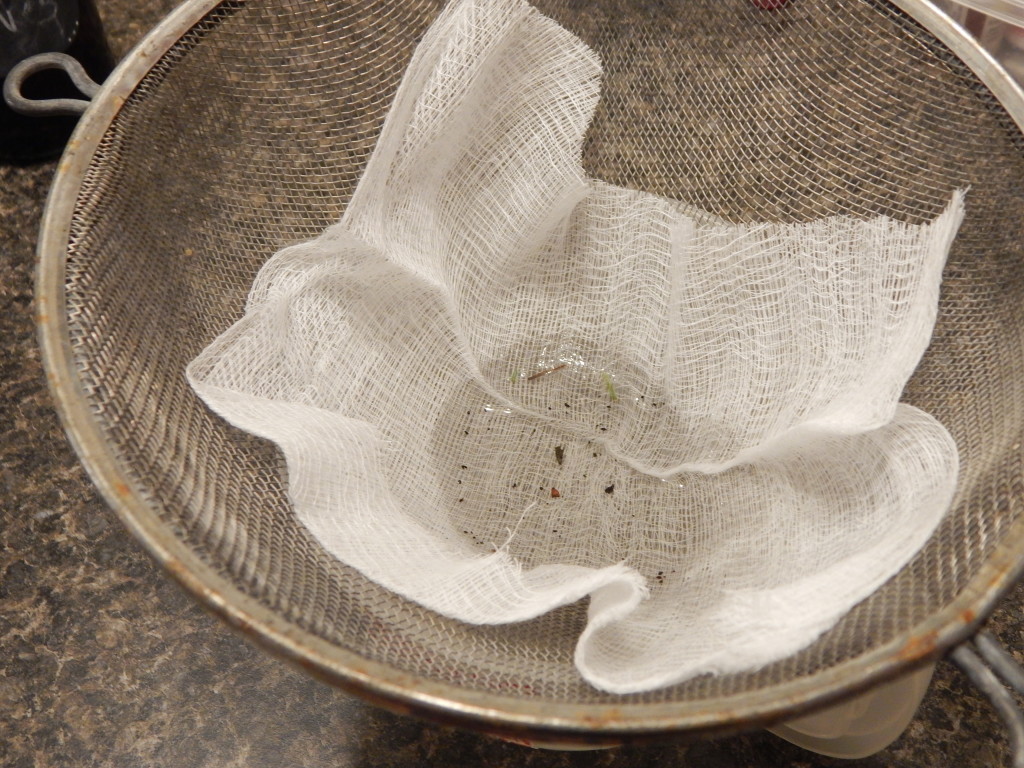 Then we transferred it to a jug for storage. By the end I had quite an assortment of sap containers! 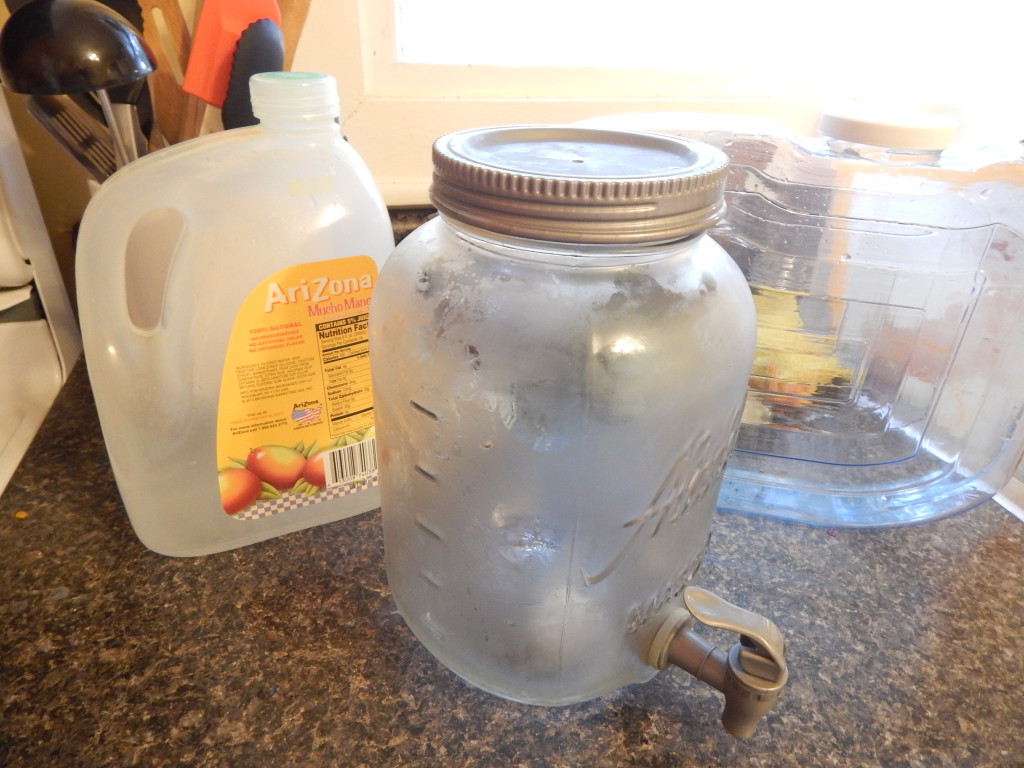 We collected for about a week. The weather was a little crazy at times. At one point it went from 70 on day to 30 the next… gotta love late winter in Ohio! When the sap froze we just brought it in and waited until it thawed, then strained and stored it.

After a week we had 6 gallons of sap, so we were ready to go!!

Now anyone who has made maple syrup before, and the instruction book that came with the Tap Your Trees Kit, will tell you to undertake the boiling process outside…

I mean you’re reducing gallons into cups… that’s a lot of evaporation.

I used a gigantic pot that I have and usually use for canning, it holds about 3 gallons. 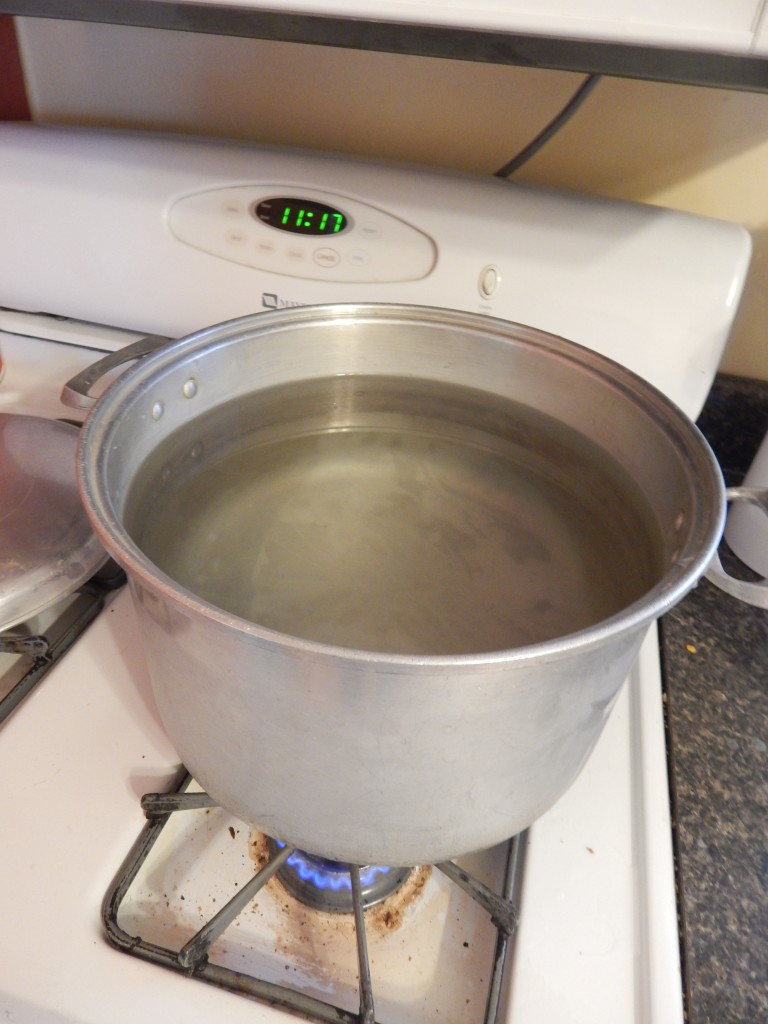 Then I got it boiling, it took awhile!

Now I had a smaller pan on the stove too, as the larger pot’s level dropped I’d heat up more in the smaller pot before adding. That way the boil wasn’t interrupted.

Now, I got a lot of other kitchen projects done during this time. I did some  baking, worked on a couple crafty things, and every once in a while my “helpers” would check in.

Once we were down to about a gallon we transferred everything to the smaller pot. At this point it had been boiling for about 10 hours!!

After it was transferred to the smaller pot that’s when things got exciting. It started to taste a lot sweeter, and the boiling went much faster. After about an hour it had reduced by almost half. 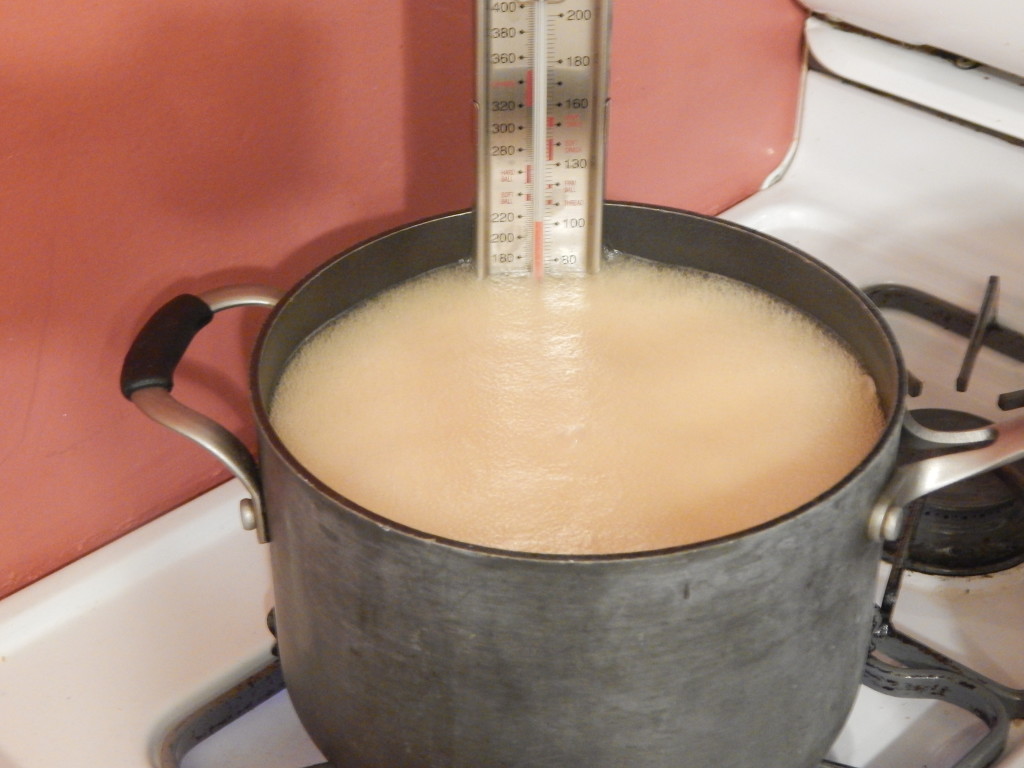 Then we broke out the thermometer and watched closely.

This is the point where it’s important not to be multi tasking. All of a sudden the sap comes to life and starts bubbling and coming closer to the edge of the pan. You can give it a stir to calm it down a bit, I even turned the heat down just a touch.

After another hour or so ( If you’re counting I’m up to about 12 hours now) The thermometer reached the magic number of 219 and all of a sudden… SYRUP!!! When I dipped the spoon into it, it was clear that it was much thicker and syrupy!!

It’s important to note here that real maple syrup is much thinner than the maple flavored corn syrup that is readily available in stores, so expect it to be thinner!

Once the boiling was done we had about 3 cups of syrup!

The final product has to be strained just to make it nice and clear and free of anything that was missed in the first filtering of the sap.(the kit also contains the filters!)  Then it’s ready to bottle up. 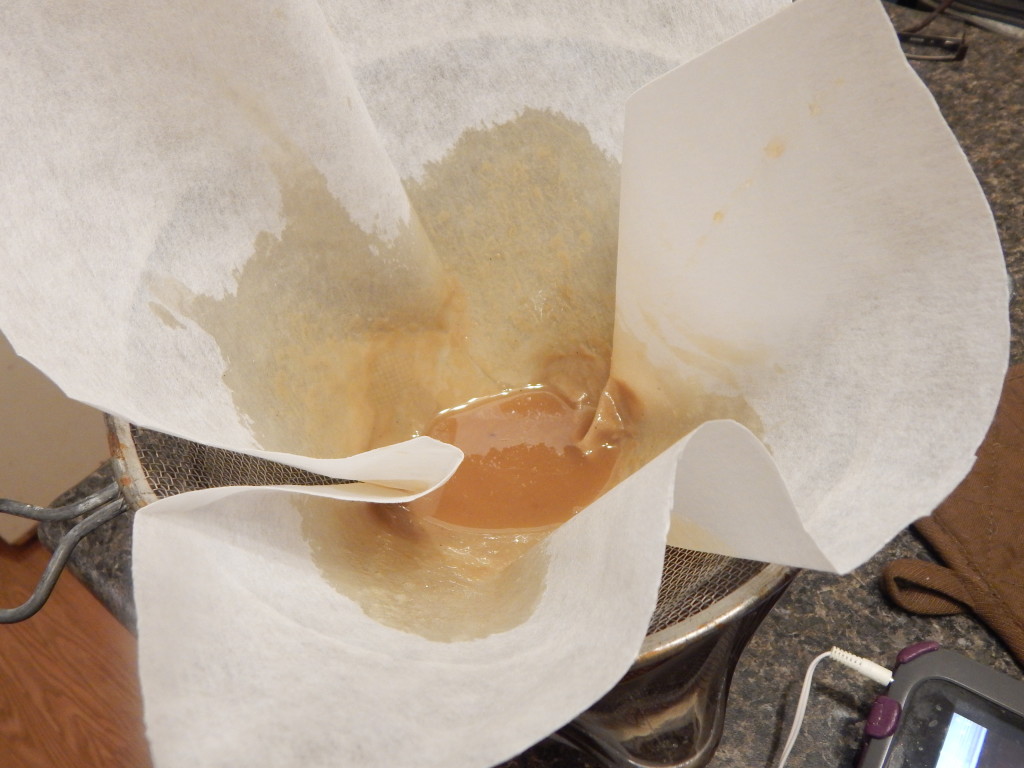 We ended up with a whole bottle and about half a mason jar full!

Now since it was after bedtime that I finished up I promised the boys pancakes in the morning!

What We Learned about Making Syrup

1- Next time I’ll be sure to have couple food grade 5 gallon buckets available for sap storage. That will be much easier than multiple jugs.

2– I think using a fire and a more shallow pan will be a must next time. The stove method worked just fine, but I really think a fire would have sped the process up quite a bit!

3- Next year we’ll start gathering sap much sooner so that we can make even more syrup! I’m planning to get a few extra buckets and spiles too so that we can collect from multiple taps!

4- Make sure you have a whole day to dedicate to the boiling process, it can’t be rushed and while it doesn’t require constant attention, it needs a lot!

5- If you have sap in the fridge take it out to come to room temperature before you start, it makes the boiling process easier.

6- Having a great kit to start with makes the whole process easier!

I really enjoyed the process, and so did my kids! It’s really an awesome thing to start with something that looks like water out of tree in your yard and end up with delicious maple syrup! I know we’ll do it again next year, using what we’ve learned to make it even more fun!

Have you ever tapped your trees and made maple syrup?? I’d love to hear your experience!

To learn more about Tap My Trees make sure to connect with them around the web.