Home » How to Tell if Your Child is Colorblind {Plus some tips to help if they are!}

My Grandpa was colorblind. He was a gunner on an B-17 during WWII and one day while his plane was flying over the forest he spotted camouflage netting in the forest. No one else could see it, but because his vision was a little different he could. He reported it to his commanding officer.  Turns out it was a cache of German weapons.

Why do I tell you that story? Because if you’re reading this afraid your child might be colorblind, you might be a little worried how it’s going to effect them.

Well, it might end up being incredibly useful, and result in a great story. 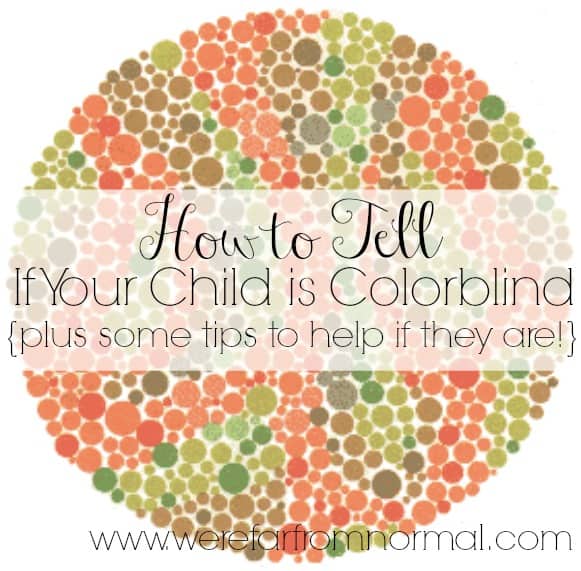 Now, the second story I have isn’t quite so cool. In fact it begins with me winning the meanest mother in the world award.

You see, when Anthony was little, like 3 or 4 years old he loved Candyland. It was his favorite game and so we spent lots of time playing it. Sometimes though, I got kind of snippy. Why? Because I thought he wasn’t paying attention. He would draw a card with a blue square and move to a purple, or one with two purples and move one blue and one purple….

“Are you tired of playing? Why aren’t you paying attention?” I’d ask, thinking he’d lost interest.

Yep, mean, mean mommy getting irritated with the kid who knew his colors spacing out during Candyland. (Most of the time I was patient… but we all have our days!)

When he went off to kindergarten I still hadn’t realized that he might not be seeing color the same way as the rest of us. They sent home a chart each week where the kids had to color in what color their card was on that day (green is good, yellow not so great, red= bad behavior) Well Anthony’s chart came home a range of colors. Green, yellow-green, yellow… I asked him about it wondering if he had misbehaved at school.

“No mommy, they’re all green.”

I still thought maybe he was just grabbing whatever crayon was close and didn’t thing too much about it.

One day that winter his little friend was at our house to play and when he went to leave he grabbed his coat.

“Hey Mommy, Alex and I have the same coat!” Anthony said.

“Yeah, they are the same coat, but his is grey and yours is green.” I said.

Well the light bulb finally came on… sometimes I’m not too quick… clearly.

My child is colorblind.

Color confusion – that’s the first thing to look for.

Does your child get things that are similar colors confused? A green shirt and a brown shirt? Maybe their coat or shoes with someone else’s…. maybe they’re a little frustrating to play Candyland with?? If they know their colors for the most part but seem to get confused sometimes, it’s a great indicator.

Once the light bulb finally came on I got online and looked for color blindness tests. They’re super easy to find (Here’s a link to some) and an accurate indicator of color blindness.

Have your child look at the tests and ask what they see.

For someone who isn’t color blind they are fairly obvious. To someone who is they may see some, they may not see others. If your child is  young and maybe doesn’t know all their numbers have them trace what they see with their finger.

It’s a very interesting thing as you realize that your child isn’t seeing the world around them the same way you are!

If you want you can confirm it with an eye doctor

Anthony was due for a check up at the pediatrician and they did a standard eye test. She recommended we see an optometrist  and I figured it was because of the color blindness. We made an appointment and went.

Turns out he needed glasses, but while we were there they also confirmed what we already knew. He is red/green colorblind. Just the same as his Great Grandpa. The eye dr. assured us that unless he had plans to become a fighter pilot or bomb tech. it wouldn’t affect his life much.

How does it affect their life and how can a parent help?

Besides people constantly asking him what color things are, which is pretty annoying, there are no negative effects. So that’s good to know! 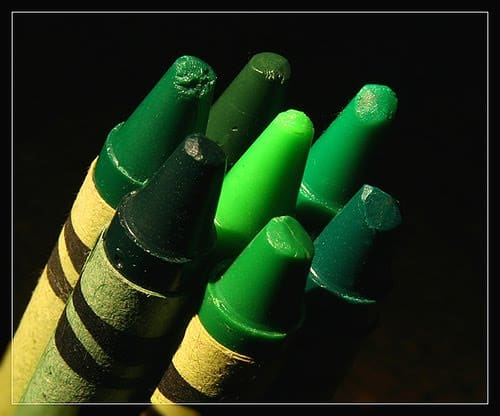 First figure out what colors they get confused with. With Anthony purple and blue are tricky. Dark colors like burgundy and dark brown he often mistakes for black, and tans, greens, greys,  and browns can sometimes all look the same. Knowing that if I’m asking him to get a burgundy blanket out of the closet I know to say, “it might look black to you.”

You want to make sure they know what color their stuff is. I can’t tell you how many times, even at 17, I’ve mentioned his blue shirt or green shorts only to have him respond surprised that he thought they were a different color. Things like coats that they’ll take off are particularly important.  If they need someone to help them find something they’ll need to know what color it looks like to everyone else.

They might need fashion advice.  Anthony often consults me about what color something is, if certain colors go together. When we are planning his outfits for dances I make sure I know what color his date’s dress is so he can match. Choosing paint colors with Anthony is always an adventure too. He loves bright colors, because they are the ones that stand out to him… compromise has been necessary!

While they’re small tell people who need to know. They’re teachers, coaches, scout leaders… anyone who they are with a lot should know. It may not seem like a big deal but sometimes it can be confusing if things are color coded or they’re playing games with color involved. Color by number pictures, assignments that require certain colors to be used… they will probably need help with those! 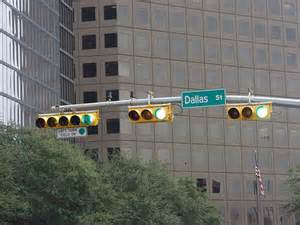 If your kiddo is colorblind it’s not a big deal at all. There may be a few things to get used to. When they learn to drive sideways stop lights might become a big concern in your life… lets’s stick to the up and down ones people!  Occasionally their clothes might not match too well. They might me a little annoying to play Candyland with… But who knows, one day it might come in handy and result in a pretty cool story.