Home » How to Make a Milk Carton Bird Feeder

Every time I say to the Teenager, “you probably won’t have any more snow days after this.” Mother nature feels the need to prove me wrong.

But in between being dumped on by the white stuff we’ve had a few mild days. When they come the chirp and chatter of all the little birds can be heard and we love to watch them hopping around in the yard.

Daniel in particular loves them. He’s been wanting a bird feeder for a while so we decided one cold snowy afternoon to make one. 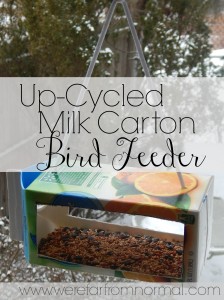 A sharpie or other marker

Scissors or an x-acto knife

About 18 in of thick string/twine. (more or less depending on the length you’ll need)

This is a pretty simple and straight forward project.

The first thing you want to do is to draw two rectangles on opposite sides of the carton. You want to leave 1/2 to an inch clearance around it.

Now if you’re using scissors it’s fairly easy to puncture through the carton and get started cutting. Just be careful with whatever you’re using and cut the rectangles out.

Now you’ll need to poke 2 holes in the top each about 1 in. from the ends of the carton. ( don’t count the pointy part at the top)

Thread your string through the hole pull it through and tie in a double knot.  Decide how long you want to it be and then.  Repeat on the other side.  Trim off any excess. 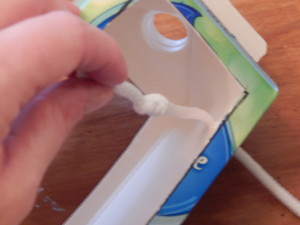 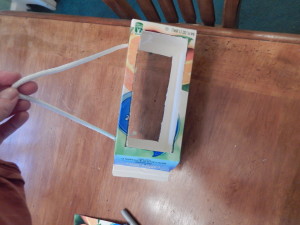 At this point if you wanted to embellish it with some stickers or tape you could do that. Daniel liked the orange juice motif.

To hang it you can use a suction cup hook on the outside of your window. It is so cold here though that ours kept falling off. So I opted to tilt in the lower part of the window and loop the string around the window lock. You could also tie it to a hook or tree out side. 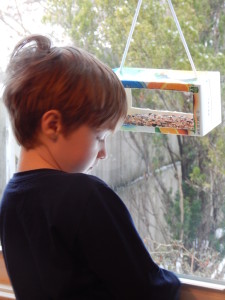 Now fill it with bird seed and watch for your birdie friends to come and eat! (the serious case of bed head is optional!)