Home » Getting Rid of Kid’s Stuff (without fighting or tears!)

Getting rid of kid’s stuff can be a challenge! They don’t want to see it go, and you’re ready to purge and make room! Here are some ways to get your kids to part with their stuff without tears or fighting!

When you’ve got kids you’ve got STUFF!  Whether its toys, collections, piles of rocks, broken crayons… there’s no doubt that at any given time you could probably pack up a few boxes and garbage bags out of your kid’s room and donate or trash them.

But then you mention it to your kids… or God forbid, try to take out a box of stuff in front of them… and then….

It all goes to hell. Your intentions of cleaning and purging their overflowing room get washed away in a flood of tears, arguments about why they neeeedddd to keep those things, how they were going to play with that toy that has been in the closet for 3 years tomorrow.

So you give up, or fight through the tears and earn your meanest mommy in the world award for the day.

What if I told you there are ways to purge their stuff drama free? Some sneaky, some not…  ways that I have learned over the last 18 years of mommyhood that have helped tremendously in keeping my kids room (somewhat) under control! 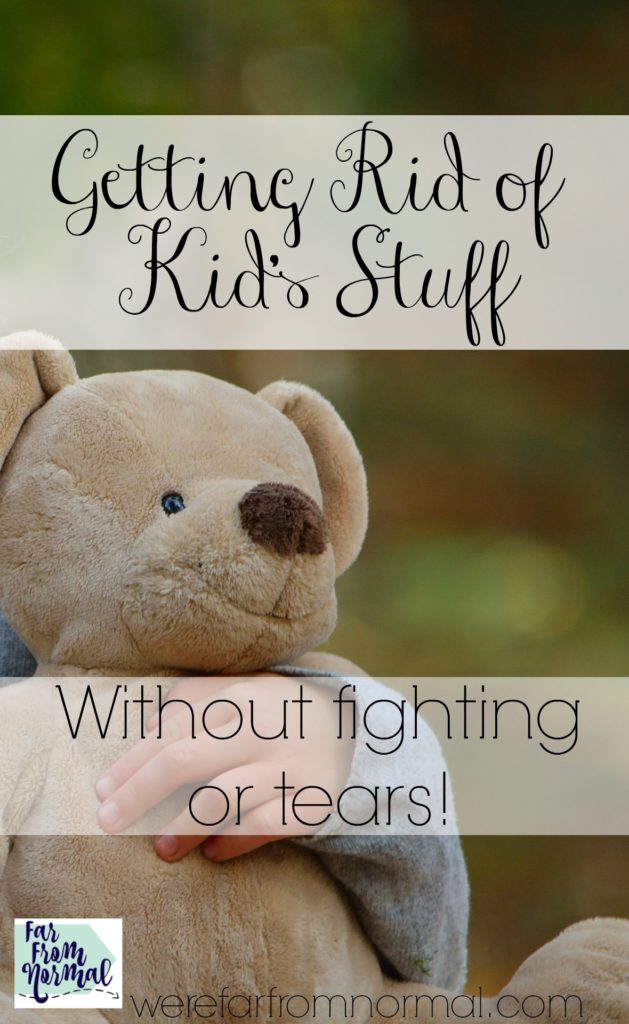 Here are my tips for getting rid of kid’s stuff without fighting or tears!

#1- Do it on the down low-  This is probably  the most obvious and the sneakiest.  If you can get a few hours when the kids are with dad or grandma, get to purging! Since that is not often an option sometimes you have to get creative. When they’re watching tv go in their room and grab a few things, if they’re playing outside pick one shelf and clean it off… you can get a lot done in a small amount of time and without little eyes watching your every move.

#2- Do it in small batches- Suddenly taking a ton of stuff out of your child’s room can sometimes be a big deal. Pick one area at a time and go through it. The toy box, the closet, a drawer or two. It’s way less stress on you then to try to conquer the whole job at once. Plus they’re less likely to realize anything is missing if it’s done a little at a time.

#3- When in doubt Don’t throw it out-  Have you ever gotten rid of something only to find out that it was the most precious item your child has ever owned? (in the moment they find it missing at least). It’s kind of crazy what they suddenly remember they owned when it’s missing from their room. If you want to avoid the potential meltdown, box everything up and put it somewhere out of sight for a while. Stow them in your attic, basement, garage or storage unit for a couple of months. My rule is that if they haven’t realized that something is missing in 6 months then it’s safe to get rid of it! If they ask for something I “find” it for them… Don’t let them know that there is more stuff hidden away!

#4- Let them “help” – This is totally not my favorite… but it works sometimes. When we were moving I knew we needed to really downsize our gazillion  stuffed animals. I got a tote and told the boys that we were filling it and only what fit got to go. I would pick out similar stuffed animals, like 3 stuffed dogs, and let them pick which one stayed and which could go. Giving them a choice helps make it easier, and lets them feel like they have a little power in the situation.

#5- Let them give things away or sell them- I know for my older kids they were more inclined to get rid of stuff if they could give some things to their little brother… stuff still stayed in the house, but it is progress, and helped start the process and lead to getting rid of other things. If they have a friend who would like to have something, let them give it to them. Pick a charity and let them help kids in need with their unwanted items. If they have big-ticket items help them list them for sale to make some money or have a yard sale and let them keep the proceeds from the sale of their things. Money is always a great motivator!

Finding a balance between an uncluttered house and happy kids can sometimes be a struggle! Getting rid of kid’s stuff can be easy and make everyone happy!