Need an amazing holiday dessert that is super easy to make? This eggnog poke cake is it!! Cake mix and instant pudding make this tasty cake incredibly easy. Homemade touches and eggnog give it an awesome flavor! 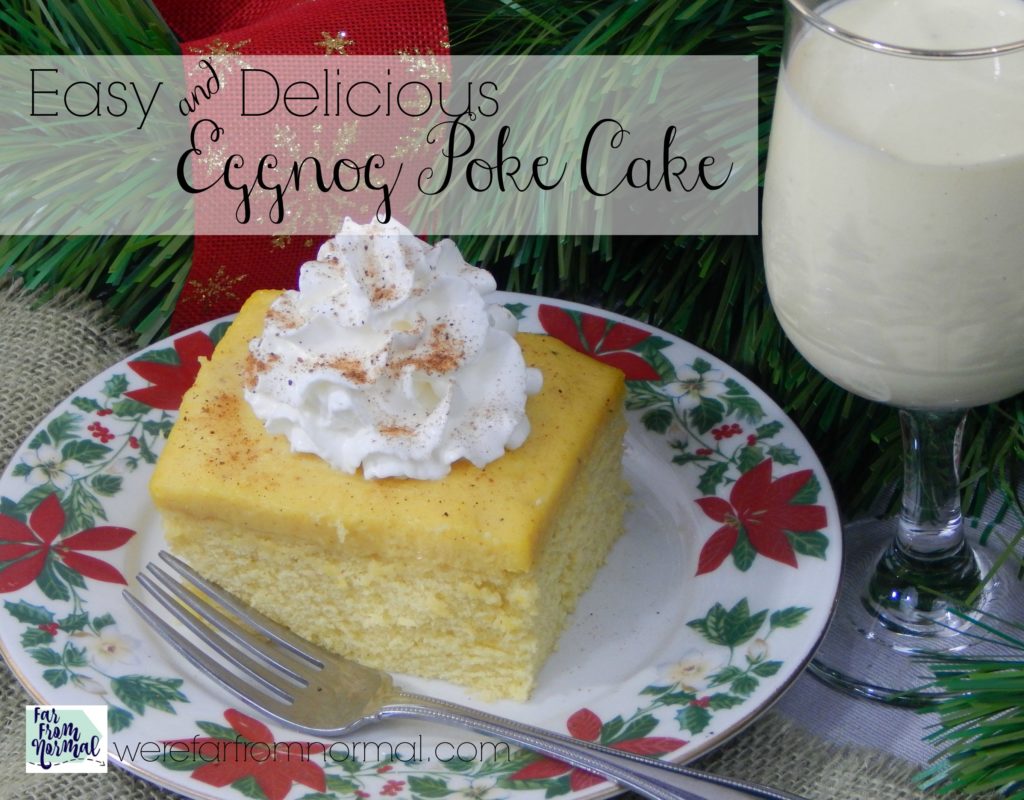 When I was little my mom had this cookbook, it was the “Amazing Magical Jello” cookbook, with a funny little magician on the front and a whole bunch of recipes made with Jello and Jello pudding. It was a well-worn cookbook, and I remember one of my favorite things in it was a Jello poke cake.  It started with a tasty white cake that had holes poked in it and then raspberry or strawberry Jello poured across the top. The final product was coated with a nice topping of cool whip… the perfect ’80’s dessert, and I loved it!

Somehow a couple of years ago Daniel, my youngest, found out about poke cakes and he wanted one for his birthday made with chocolate pudding. He is a huge fan of pudding! I obliged and made him a chocolate cake covered in chocolate pudding, and he loved it!!

Well, for the holidays we have a carton of eggnog in the fridge, and once again my pudding connoisseur gave me an idea. “Can you make eggnog pudding?” he asked.

This… this recipe is what happens. A tasty dessert that captures all the flavor of Christmas in a super easy to make cake that tastes like you spent a ton of time making it.

It, my friends, is a holiday dessert win.

Now, I used a boxed cake mix for this, you can always start with your favorite yellow or white cake recipe and go from there. What I love about this recipe is it’s semi-homemade preparation. I’m usually a  from scratch kind of girl but even I like a short cut now in then that results in dessert deliciousness, especially around the holidays when time is at a premium!

Make sure to plan ahead though, it does need time to chill! 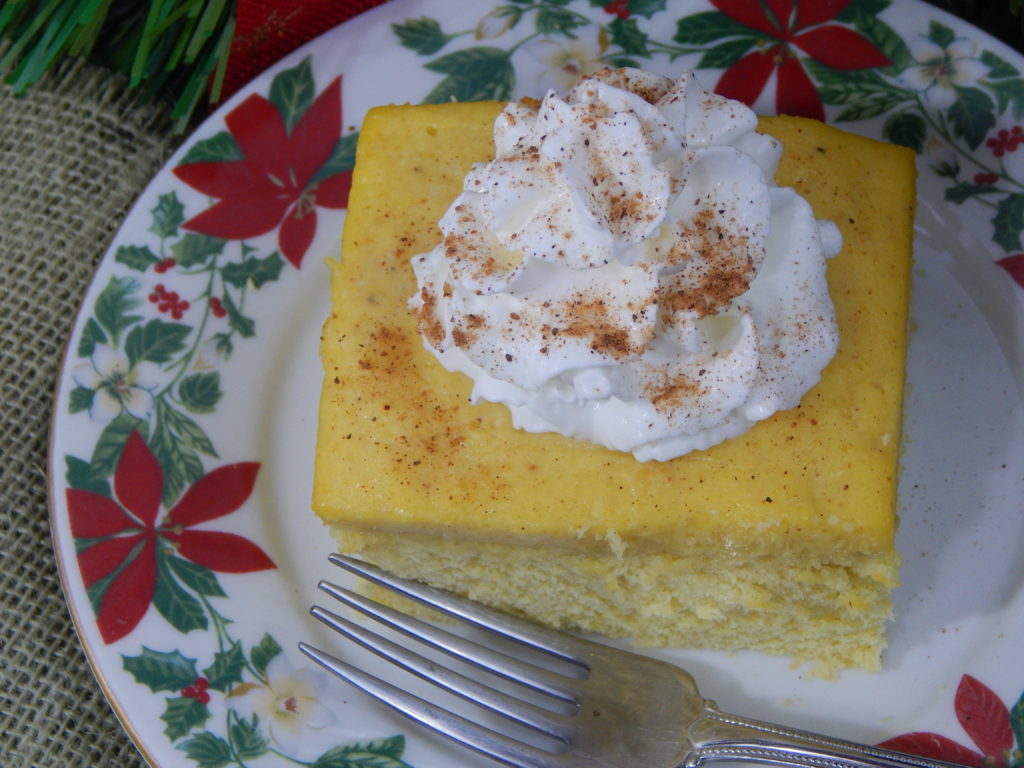 Here’s what you’ll need for this eggnog poke cake-

Your favorite white or yellow cake mix or recipe

The first thing you want to do is bake your cake according to the directions or recipe and then let it cool completely.  Once it’s cool you’re going to poke rows of holes in it using your straw. 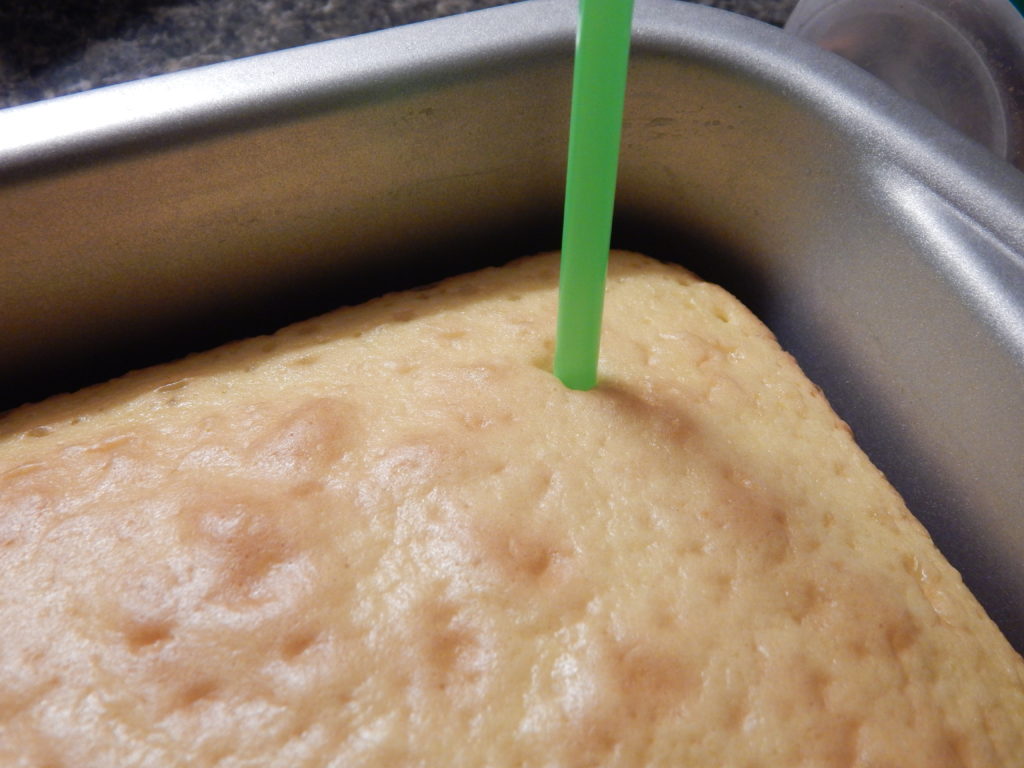 Keep poking holes until the whole cake is evenly covered with holes. 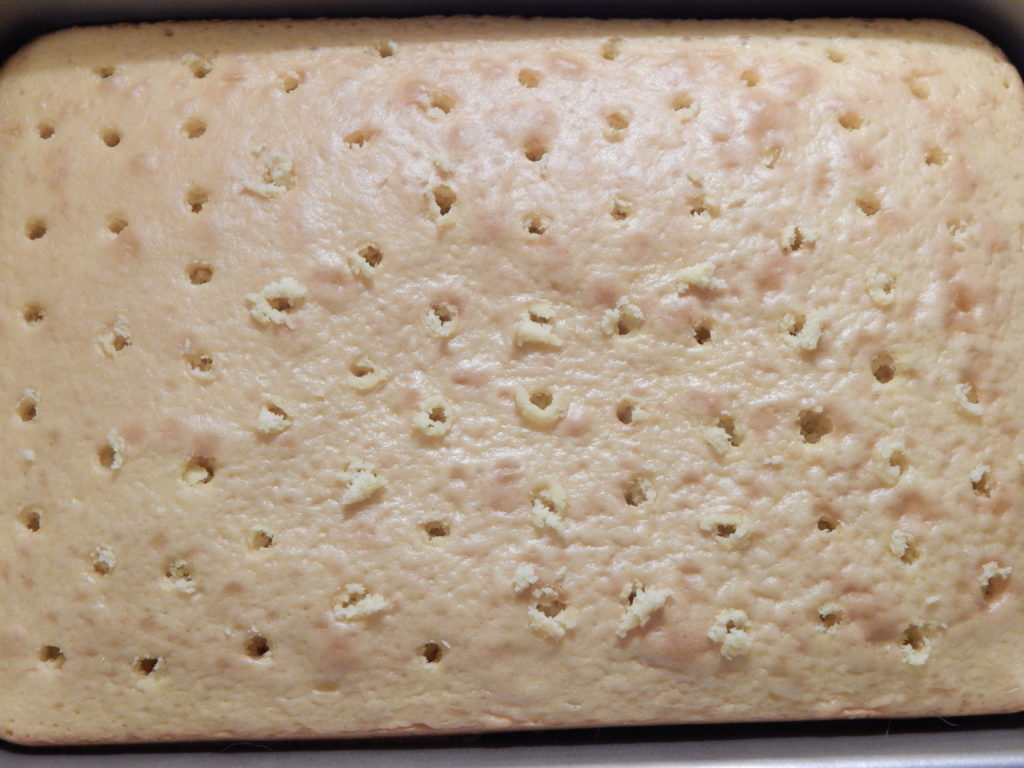 Now mix your pudding mix and eggnog together and add in your nutmeg. Stir well.

Pour the pudding mixture immediately over your cake, nice and evenly and slowly allowing the mixture to pour into the holes. 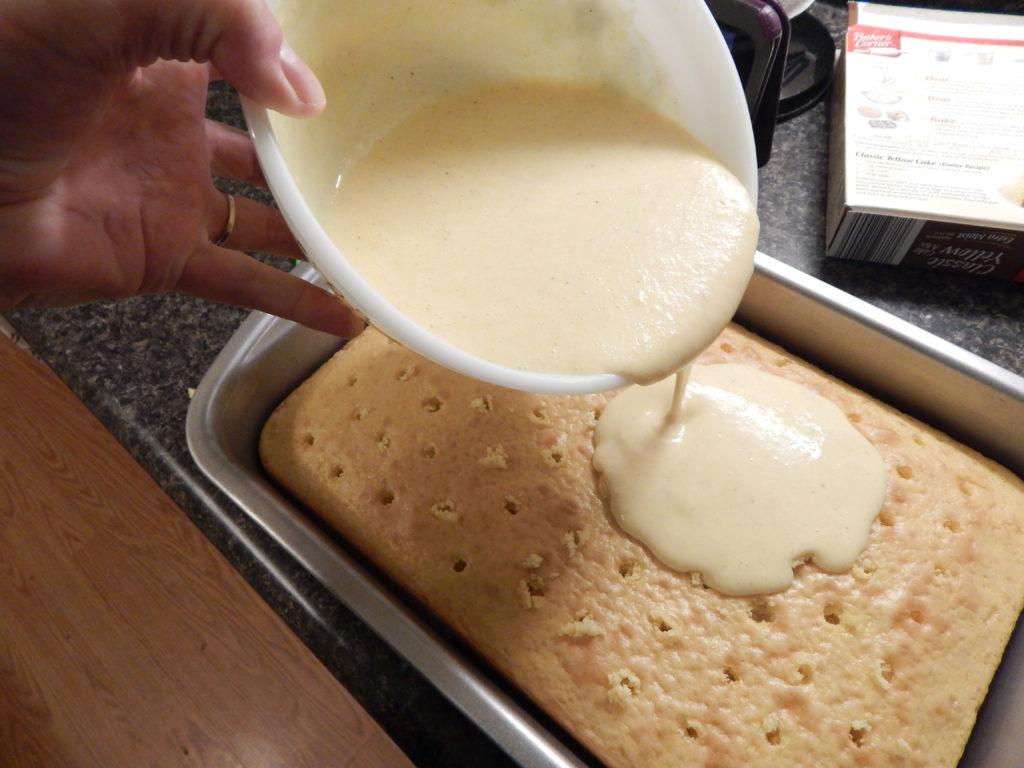 Not all of the pudding mixture will sink in, some will stay on the top, spread it out evenly. 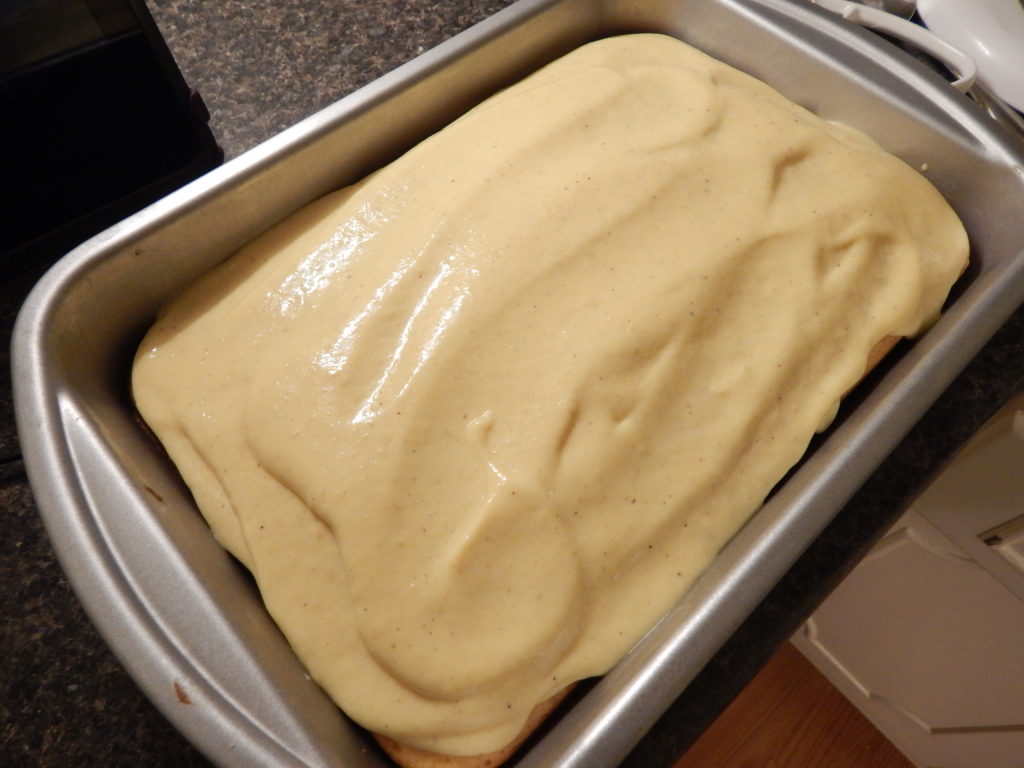 Now pop it into the fridge overnight or for at least 5 hours. This allows the pudding to really sink in and cool nicely. Keep it in the fridge until you’re ready to serve it.

When you’re ready to serve your eggnog poke cake just cut a piece and give it a nice dollop of whipped cream and a sprinkle of nutmeg!

Have you ever made a poke cake?? What varieties have you tried? 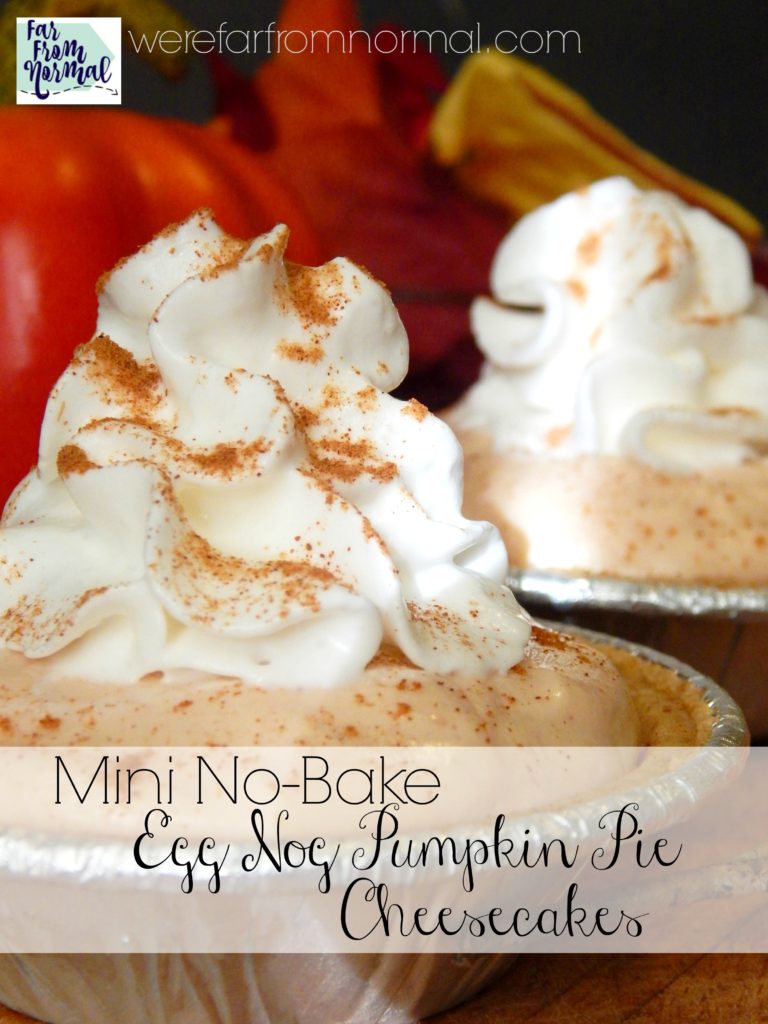