You may be thinking that homemade bagels would be hard.

Or way too time consuming.

Maybe you think that store-bought ones are just fine so why make your own.

Erase these thought from your head people, they’re not too hard, and unless you have a great bakery near you they blow store-bought bagels out of the water.

Believe me… I made 4 batches in one weekend. Mostly because I kept thinking of great new combinations and wanted to try them out!

It started when I came across this basic bagel recipe I had pinned from my fellow blogger over at Six Figures Under. She has an awesome step by step photo tutorial if you need the visual with the directions.

I decided to give them a try… and then I went a little crazy. But in an entirely carb filled, chewy bagel goodness kind of way.

These were a big favorite so I had to share them. They’re great for breakfast, or sliced and made into a sandwich for lunch… or as a snack any time! 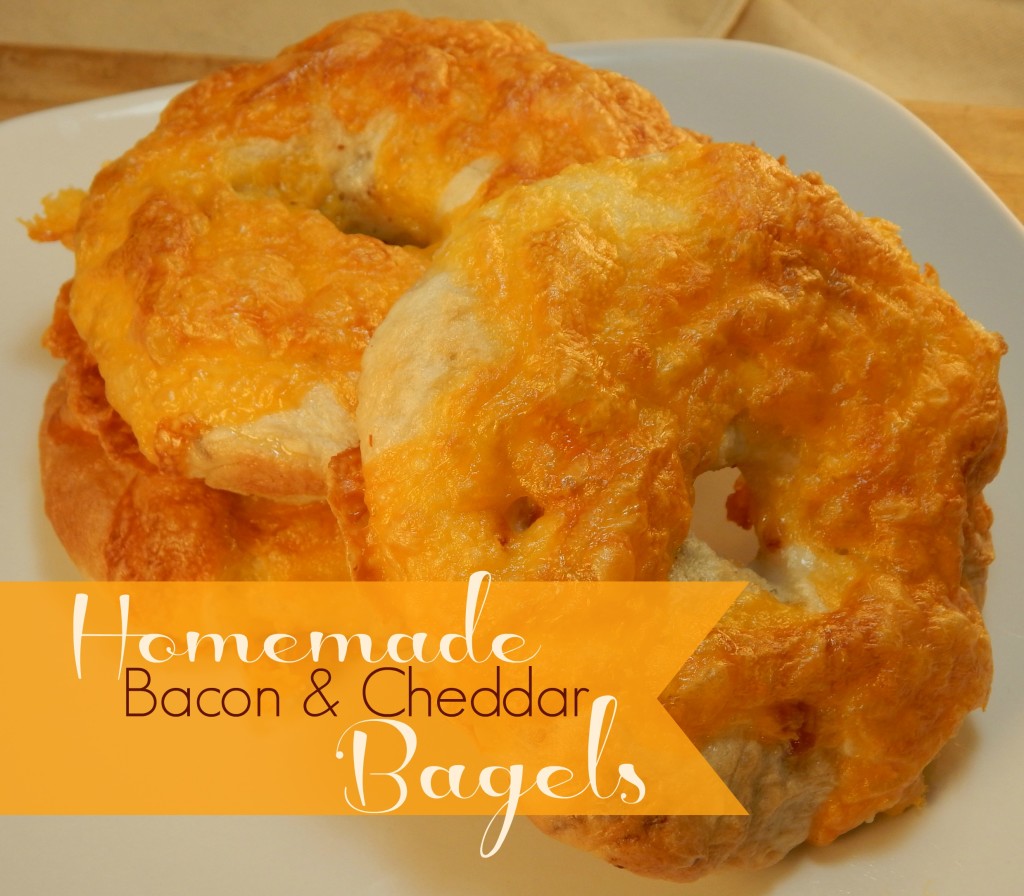 1- Cup Bacon Pieces ( you can use the store-bought kind -the real bacon ones, or make your own. If you make your own make sure they are well cooked, crunchy and drained of as much grease as possible)

If you have a mixer with a dough hook you can use it for this, it makes life a lot easier. If you don’t you can just follow the directions and do all the kneading by hand.

In your mixing bowl combine the water, yeast and sugar. Cover with a  dish towel and allow to sit & proof for about 10 minutes. It should be all nice and bubbly.

Now start your mixer and add in your salt. Slowly add your flour allowing it to incorporate in between additions. Depending on your mixer you may have to add the last couple cups and knead by hand.

Remove your dough from the mixer, place it on a well floured surface, add in your bacon pieces,  and knead for about 3-5 minutes or until nice and smooth.

Place it in a bowl (you can put it back in the mixing bowl) and cover with your dish towel and allow to rise for an hour.

Now you’re ready to get to bagel making!

Preheat your oven to 450.  Line two  baking sheets with parchment.

Fill a large pot with water and set it on the stove, bring it to a light boil and adjust the temp to maintain it.

Now place your dough on a floured surface and divide it into 16 equal pieces.

I do this by cutting it in half, then in half again… you get the idea.

Now form your dough into balls and press your finger into the middle forming a bagel.

Once you have them all formed cover them up and let them sit for about 10 minutes or until nice and puffy.

Now drop them into your boiling water, doing them in batches so that they don’t touch. Boil on one side for about a minute, flip and boil the other side for 45 seconds.

Scoop them out with a slotted spoon or spatula and place on your prepared baking sheet.

Once you have all of them boiled, top them with your sliced cheese covering each top.

Now pop them in the oven for about 20-25 minutes, or until the cheese is nice and bubbly and the edges are golden brown.

Let them cool and enjoy!!